Tomorrow (July 29, 2015) we will see the release of Windows 10 into the wild.  PC's all over the world that aren't under "enterprise control" have been signing up to download the update through Microsoft's "Windows Update" delivery mechanism and it is "going to drop" on July 29th, 2015.

For us (E-Business Suite DBAs) there should be at least some level of concern.

Because they are using this mechanism, this will likely be the largest mass deployment of software that anyone has witnessed.  Also, due to the delivery method, I would expect that Windows 10 uptake will significantly surpass any other Windows roll-out in history.

Remember, with previous Windows upgrades, you either had to go out and purchase the software or you got it when you acquired a new laptop.  This meant that, with few exceptions, those of us who have to deal with these changes at least had some breathing room before we really felt it.

Beginning tomorrow, however, anyone with a licensed copy of Windows 7 (SP1), Windows 8, or Windows 8.1, could potentially upgrade to Windows 10.  While this really isn't a concern for most corporate PC's (where software updates/upgrades are managed by the centralized IT department), if you're on a project where users and/or consultants have "unmanaged" PCs, you could encounter some questions.

The first thing you need to know is that, of course, nothing about Windows 10 has been officially "certified" by anyone at Oracle yet.  So, you could always stand behind that statement.  And, certainly, if your IT department is even considering rolling out Windows 10 to anyone, they should wait until that certification information is released.

Now, for those of you who are just wondering, does it even work?  The answer is, yes, it appears to... but there are a few things you should know.

First, Windows 10 ships with a new minimalistic browser called "Microsoft Edge" (also known as "Project Spartan").  The browser works pretty well and the interface is clean, which is nice.  But, Microsoft Edge doesn't support plug-ins (specifically, it no longer supports Active-X).   This means that you will be unable to launch Java from the Edge browser which, in turn, means that you won't be able to launch Oracle Forms from within E-Business Suite.

But, never fear.  Windows 10 also ships with Internet Explorer 11, which is certified in many E-Business Suite configurations.  I performed some rather limited testing (log into R12.1.3, launch forms, basic navigation) using a recent pre-release version of Windows 10 (x86-64, build 10301) and Java JRE 1.8.0_51 (32-bit) and everything appears to function without much issue.  Obviously, this was far from a complete test and I wouldn't go into production with it.  Fortunately, since Oracle has already certified Internet Explorer 11 on Windows 7 and 8.1 (notably, not Windows 8) with EBS, I doubt that certification for IE11+EBS+Windows 10 will find too many problems. 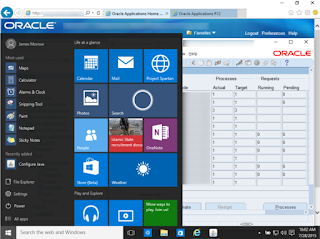 So, the long and short of it is, should you encounter that Windows 10 early adopter, they should have some luck using Internet Explorer 11 (assuming that you're patched up to support it per MOS 389422.1, of course).    Of course, should the user be technically inclined and still want to remain an early adopter, I strongly recommend running an older version of Windows (Windows XP or Windows 7) in a VirtualBox VM.   It's a great way to be current and still be able to use some of the really old tools.  (Workflow Builder, anyone?)

Posted by Unknown at 4:31 PM No comments: Links to this post